Home > Technology > What is the Difference Between Pump and Turbine? 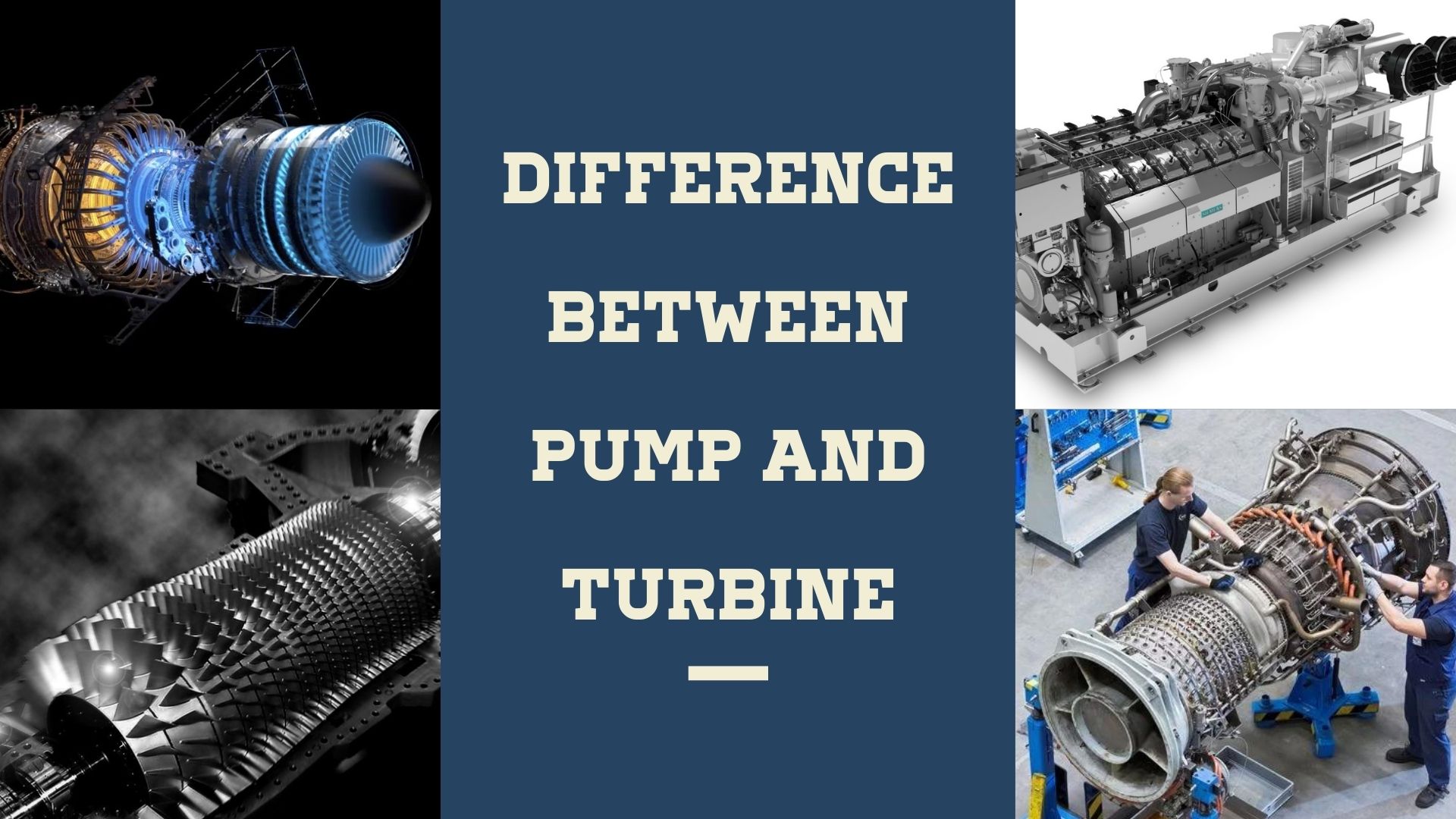 What is the Difference Between Pump and Turbine?

Pumps and turbines are two common devices in many industries. The turbine is a device that can collect energy and convert it into work. A pump is a device that moves liquids. Both of these devices are critical in a variety of fields, including electrical engineering, mechanical engineering, civil engineering, construction, power generation, automobile engineering, and many others. In this article, we will look at what a turbine and a pump are, how they work, the different types and variations of turbines and pumps, and finally, the difference between a turbine and a pump.

What is a pump?

A pump is a turbomachine that moves liquids from one location to another. Pumps use mechanical energy to accomplish this. The pump works on the liquid to increase its energy to a higher level of energy, or entropy, and thus its pressure.

The majority of pumps operate on a rotational basis. However, some pumps have been developed that increase liquid energy by linearly moving their components. Pumps are typically powered by a gasoline engine or an electric motor. The important thing to remember about the pump is that it does not convert energy but rather directs it in a specific direction.

The pump is not completely efficient because some energy is lost due to vibrations, noise, and heat. Gravity causes water to flow downward. As a result, humans must devise a mechanism that raises water from lower levels for use in daily life, such as washing, hygiene, food preparation, or special uses such as agriculture, animal husbandry, and industrial applications.

What is a turbine?

Turbines are water machines that absorb and convert energy from the flow of water into mechanical work. Mechanical work is converted into electrical energy by connecting an electric generator to the shaft of a turbine. The shaft is the rod that runs along the turbine’s central axis and rotates around itself with the blades attached to it. A turbine’s blades are typically shaped like fan blades. Of course, they can take the shape of buckets in some cases. The turbine geometry is designed so that the liquid can rotate the rotor in the same direction as the force applied to the blades.

As previously stated, the turbine’s rotational motion can be used to generate energy by connecting to a dynamo. Connecting the turbine shaft to the pump, for example, can direct water from a lower reservoir to an upper reservoir. A portion of the power generated by a turbine, like a pump, is lost as noise, vibration, or heat. As a result, no turbine is completely efficient.

Difference between Turbine and Pump

Now that we have a thorough understanding of the pump and turbine, their functions, and previous examples, we can discuss the differences between the two.

The following are the differences between a pump and a turbine:

The pump was designed to move fluid from one location to another at a higher pressure and energy level. As a result, a pump boosts the energy of a liquid.

The turbine converts the kinetic energy of a high-speed or high-pressure fluid into mechanical energy for the rotation of the rotor and shaft, and thus into electrical energy. As a result, the turbine reduces water energy.

The distinction in Working Principles

The pump and turbine operate in reverse.

Pumps use electrical energy from an external source to move impellers. This movement transfers momentum to the surrounding fluid, causing it to move.

The operating conditions of a pump and a turbine differ.

Pump
Pumps usually run at constant head, flow, and rotational speeds. As a result, the pump is designed for a specific case, known as the working point. In an ideal world, the operating point corresponds to the maximum pump efficiency.

It does not require a device to adjust the current, such as a nozzle or guide blade, due to the constant working conditions.

Turbine
Turbines, on the other hand, operate under varying head and flow conditions. The flow of a hydraulic turbine must be adjustable to account for seasonal and sporadic variations in available water flow.

As turbines are commonly used to generate electricity, and off-grid power plants are used in remote areas, the power output must be proportional to consumer demand.

The flow rate of a water turbine is controlled by the guide vanes (in the Francis turbine), the adjustable blades (in the Kaplan turbine), and the system including nozzles and spears (in the Pelton turbine). The gas turbine control system monitors the gas turbines working. With integrated control system solutions, you get superior performance for a connected plant. It scales and adapts to changing requirements in thermal and renewable power generation, oil and gas, and safety applications with ease. DS200FCRLG1A, DS200RTBAG1A are some examples of GE control system parts.

You may also like: Things to Consider Before Hire Shopify Developers

What is the easiest project management tool to use?

The Difference Between Market Intelligence vs. Market Research